Community of San Diego in California 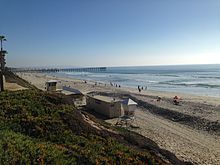 The Crystal Pier at sunset

Pacific Beach is a neighborhood in San Diego, bounded by La Jolla to the north, Mission Beach and Mission Bay to the south, Interstate 5 to the east and the Pacific Ocean to the west.[1] While formerly largely populated by young people, surfers, and college students, because of rising property and rental costs the population is gradually becoming older and more affluent.[2] "P.B.," as it is known as by local residents, is home to one of San Diego's more developed nightlife scenes, with a great variety of bars, eateries, and clothing stores located along Garnet Avenue and Mission Boulevard. 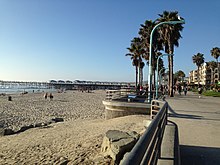 The beach near the boardwalk and pier

Pacific Beach's namesake stretches for miles from the Mission Bay jetty to the cliffs of La Jolla. The boardwalk, officially called Ocean Front Walk/Ocean Boulevard, is a pedestrian walkway that runs approximately 3.2 miles along the beach from the end of Law St. in the north down into Mission Beach, ending at the mouth of Mission Bay in the south. There are numerous local shops, bars, hotels, and restaurants along the boardwalk, and it is generally crowded with pedestrians, cyclists, rollerbladers, skateboarder and shoppers. Adjacent to the boardwalk is the Crystal Pier, a public pier and hotel at the west end of Garnet Avenue. San Diego City Council banned the use of all electric-motor scooters in December of 2019.[3]

The streets in Pacific Beach were renamed several times before receiving their current designations in 1900.[4][5] The primary north-south street running parallel to the beach is Mission Blvd., with the streets named after late 19th century federal officials, then incrementing in alphabetical order as they move further from the coast: Bayard, Cass, Dawes, Everts, Fanuel, Gresham, Haines, Ingraham, Jewell, Kendall, Lamont, Morrell, Noyes, Olney, Pendleton, Quincy, Randall, and San Joaquin. Mission Boulevard was formerly Allison Street, being the "A" street of the series. Ingraham was initially named Broadway (1887), then was changed to Izard (1900), back to Broadway (1907) and finally settled as Ingraham Street in 1913.[5]

The east-west streets are mostly named after precious stones. Starting at the north end of Mission Blvd. and heading south, the streets are:

Before European-contact, the area was settled by the Kumeyaay people, who built a large village then known as Hamo, or Jamo, on the banks of Rose Creek at the entrance of Rose Canyon.

As with many California cities, the history of San Diego's development can be traced back to the completion of a cross-country railroad in 1885.[5] The town developed during the boom years between 1886 and 1888 by D. C. Reed, A. G. Gassen, Charles W. Pauley, R. A. Thomas, and O. S. Hubbell. It was Hubbell who "cleared away the grainfields, pitched a tent, mapped out the lots, hired an auctioneer and started to work".[4] A railway connected Pacific Beach with downtown San Diego starting in 1889, and was extended to La Jolla in 1894.[5]

Early landmarks and attractions in Pacific Beach included an asbestos factory (established in 1888), a race track, and the San Diego College of Letters (1887-1891), none of which survive today.[7][5] At the turn of the century, lemon growing and packing dominated the local economy.[5] In 1910, the San Diego Army and Navy Academy, a preparatory school, was established in an old College building; in 1922 a public high school followed and a junior high in 1930.[5] In 1927, Crystal Pier opened; the Roxy Movie theater opened in 1943 to cater to a population that grew five times during World War II.[5] The postwar period saw the establishment of many hotels: the Bahia (1953), the Catamaran (1959), and Vacation Village (1965).[5] High rise construction in nearby Mission Bay led to the establishment of a 30 foot height limitation for buildings in 1972, an ordinance still in effect.[5] Prominent boardwalk Ocean Avenue was closed in 1982 and became a park.[5]

In 1945, over 1900 residents petitioned to remove the name of William Payne from the middle school because they didn't think a black teacher deserved to be there. At the time, only two black families owned property in the neighborhood. In 2021, following a wave of name changes in the wake of the murder of George Floyd, the San Diego Unified School Board voted to rename a joint-use field at the middle school after Payne and his wife Fannie.[9]

The United States Navy operated an anti-aircraft training center at Pacific Beach during World War II.[10] During the 1960s, development continued to increase with the city's investment in Mission Bay Park, including the developments of the Islandia, Vacation Village and Hilton Hotels. In 1964 Sea World opened, which is located only a few miles from Pacific Beach.

The original name of this feature was "Bay Point" and today one may still find a USGS bench mark and associated RM (DC1025, DC1026 respectively) with that name there.[11] The "Bay Point Formation" is the name of a local rock strata first found and described there.[12]

Today, Pacific Beach is home to a younger crowd, including college students, single professionals, and families. The restaurant and nightlife culture has grown extensively, with Garnet Avenue becoming the major hub for places to eat, drink, and shop, and includes a range of bars, restaurants, pubs, and coffee houses. 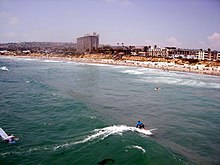 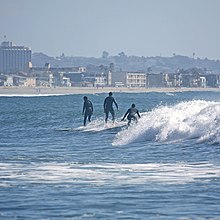 In addition to bordering the Pacific Ocean and Mission Bay Park, Pacific Beach includes Kate Sessions Park and the Pacific Beach Recreation Center. Kate Sessions Park has a playground, large lawn with ocean views, and a many acre unmaintained area used for hiking and mountain biking. Fanuel Street Park is a popular bay-front park with playground equipment suitable for toddler and school-age children. Rose Creek, which flows through Pacific Beach before emptying into Mission Bay, provides open space and a rich wetland area.

Pacific Beach is serviced in print by the daily San Diego Union Tribune and the weekly Beach & Bay Press.

In John Dos Passos's The 42nd Parallel (1930), Fainy "Mac" McCreary briefly lives in a bungalow in Pacific Beach with his wife Maisie and their daughter Rose.